My recaps have been largely absent of late.  It's mainly because I haven't been able to figure this show out.  But now, after last night's show... things make more sense. 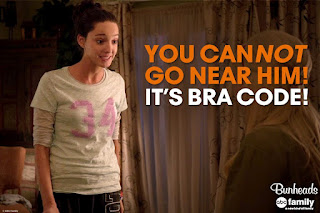 The 4 girls in the cast have been growing, changing.  Ginny is becoming a young adult, and let go of her stable, childish relationship.  She falls for a bad boy and gets crushed.  The bad boy is Melanie's brother, and this simple realization rocks her world.  Boo goes from juvenile longing to finding her confidence, and telling a boy that she likes him.  She also does the adult thing and apologizes for hurting him.  Sasha is, quite understandably, adrift.  She rebels, and finds it isn't for her.


But the crux of the show is the relationship between Fanny and Michelle.  It's been a 10 episode building of a house of cards.  Their relationship never had a strong foundation.  It really didn't have a foundation at all.  Michelle was so genuine in her desire to help.  Help Fanny, help the girls, help the business.  I just don't think that she as a person had the tools to help.

So in the end, she drove off Fanny's man, and pepper sprayed the entire cast of the Nutcracker.

The show is chaos upon chaos, until the end.  Laying in the hospital, we're treated to another dream sequence.  Michelle sings "Maybe This Time" from Cabaret.  Instead of the director in the audience, this time it's Hubble.


Michelle, who took a misstep years ago and derailed her life just wants a place to belong.  Hubble tells her that she's here to rock the boat.  She looks so relieved to see him.

In the dream she acknowledges that she's hurting her relationships with others, but doesn't know how to fix it.  Hubble again points out that everything is different.

Everybody loves a winner
So nobody loved me;
'Lady Peaceful,' 'Lady Happy,'
That's what I long to be
All the odds are in my favor
Something's bound to begin
It's got to happen, happen sometime
Maybe this time I'll win

Michelle wakes in the hospital, and confesses to Fanny.  Fanny points out that Michelle ruined her relationship, and most likely hurt her business.  Michelle slips out of the hospital, with the angry shouts of parents ringing in the distance.  Before she goes, her students (red eyes and all) stand on their chairs and proclaim: "Oh Captain  My  Captain."

How will they ever dig themselves out of this?  I'm dying to know.

(lyrics are from Kander and Ebb)