I actually got up and ran this morning.  It was a great run!  I have new music on my phone, and the sleeping in that I did yesterday helped me feel energized this morning.

After my run I got on the scale, like I do every day. 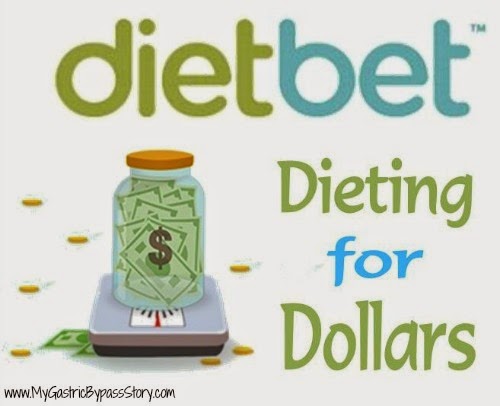 I'm a pound and change away from winning this round of the DietBet that I'm in.

I have until Sunday to love this one darn pound!!!

I wouldn't normally be so upset, but I'm SO CLOSE!

Hopefully this weekend's long runs (10 miles on Saturday and 5 on Sunday before church) will help.

Speaking of healthy, I need to overhaul my kitchen a bit.  I need to make sure that I have lower Points+ snacks and healthier "I don't feel like cooking" options in the freezer.  At Costco this weekend, I saw large pack son Naan bread.  I'm thinking build your own pizza supplies to keep on hand instead of keeping frozen pizzas in the freezer.

Basically I need to plan better!
Posted by Meari at 7:05 AM No comments:

The inmates are running the asylum 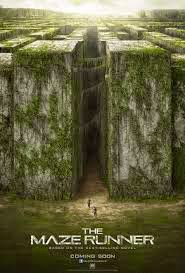 Sitting in the theater this weekend, after The Maze Runner, I realized something:

Adults in Young Adult Dysopian novels and movies really screw over the kids!  Three movies in particular, The Maze Runner, The Hunger Games movies and Ender's Game (and the corresponding books) really illustrate this.

If you haven't seen The Maze Runner... come back after you do so.

In The Maze Runner, a group of boys find themselves with no memories and at the middle of a maze.  They make a life for themselves, and try to escape.

In the end, it was adults that put them in the maze.  It was adults that used them like lab rats (in maze even) for research to cure an awful disease.  These boys were violated, used and killed. 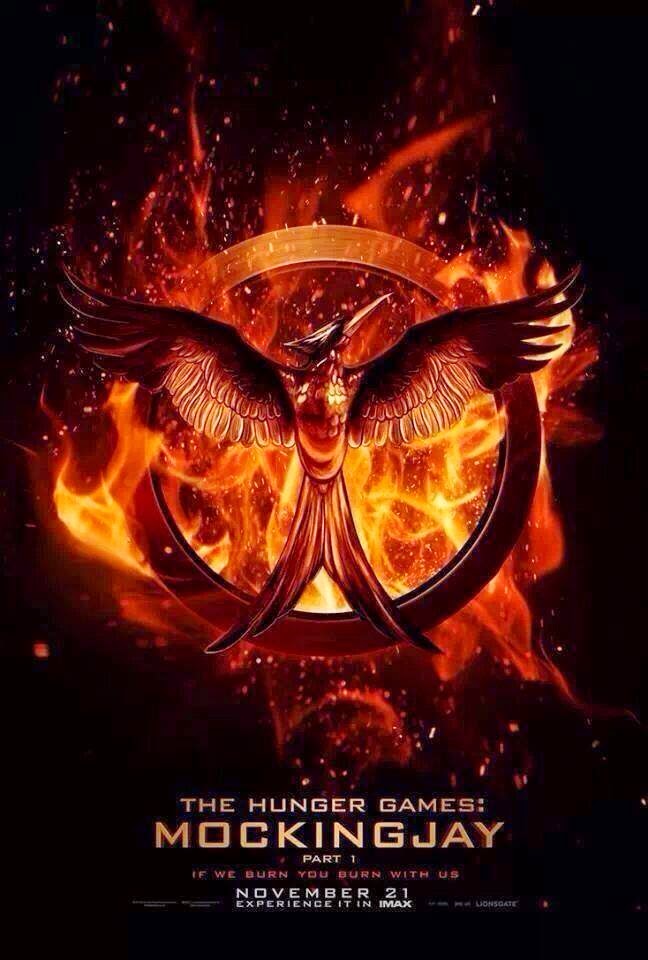 The Hunger Games books and movies center around children that are removed from their families and thrown into an arena to fight to the death.  Privileged adults removed these children, and privileged adults from the capitol watched it as a sport, not a tragedy.  Only a few of the districts were on board with the gleeful killing of their young.  The others looked on it with horror.

It was these children that started the revolution.

Now, these movies and books have their horrors.  But honestly, the one that disturbed me the most was Ender's Game. 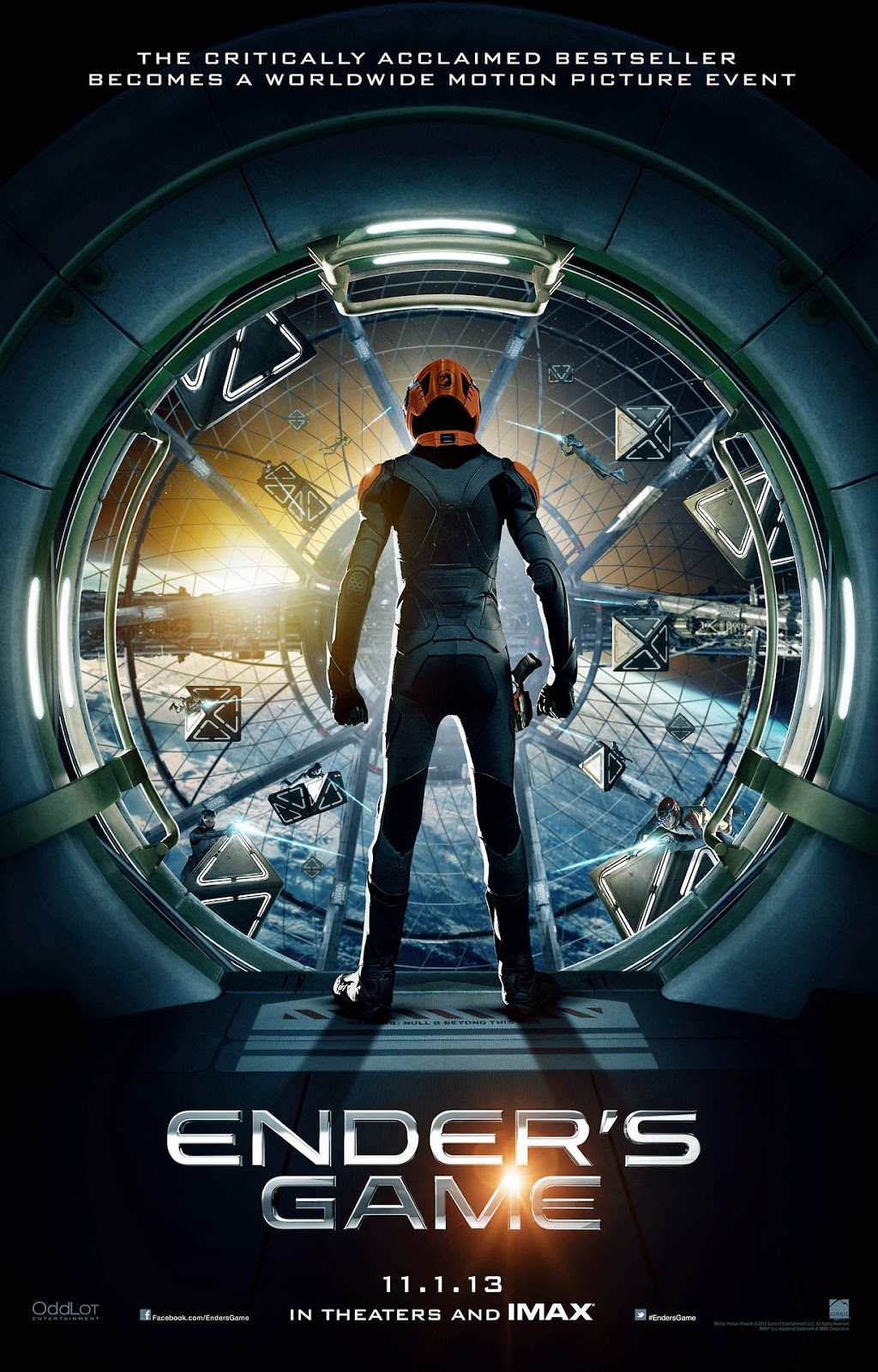 In Ender's Game, children are sent to military academies to prepare them for war.

This in and of itself isn't awful.

But the end game.  The seeking out of brilliant tacticians to train in simulations that center around the killing of their enemy is hard enough to watch.

But when these adults reveal that the simulation was real, and Ender not only made an entire species extinct, but he killed hundreds of soldiers as well, it turned my stomach.

Hunger Games killed kids for sport.  Maze Runner killed them for research.  Ender's Game used children as weapons against their will and without their knowledge.

In many YA Dystopian novels, the children and teens aren't as brain washed as the adults, and it's up to them to figure things out, but these three take the cake for adults as manipulators.

Seriously, are there any YA Dystopian novels that paint adults in a good light?
Posted by Meari at 9:01 AM No comments:

Monday I got home from work totally uninterested in making dinner.  So we had a frozen pizza (my emergency meal).  After, I was sitting on the couch and man, I didn't feel well.  (Save it all you nutrition people!)  My head hurt, my throat was sore, my body ached.

Tuesday I woke up feeling the same.

Work was the question.  I actually had no problem coming in.  I've done it before.  I come into work sick and work until I feel like I'm going to fall asleep sitting up.  But I can't do that now.  Not with my co-worker going through chemo.

So I did the only thing I could do.  I stayed home.  I slept in.  I binged watched the entire first season of Finding Carter.

How does this bode for my half marathon training?  Not well.  I missed two runs this week on account of being ill.  I'm hoping to run every other morning this week and do a long run on Saturday. 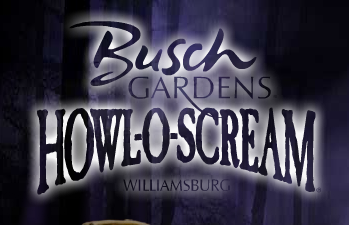 I also wouldn't mind checking out the Howl-O-Scream decorations!  I hate haunted houses, but during the day there's no scaring and the park is all decorated!
Posted by Meari at 10:02 AM No comments:

I had to leave work early today.  Decongestants were a MUST.

After setting home and changed, I cuddled up with the puppy on the sofa.  I felt that all too familiar feeling settle on me.  Heavy limbs.  Everything in my head getting fuzzy.  I fell asleep.

I woke up and realized something.

Now no, I'm not unhappy with my job, or my relationship or anything.  Just not happy.  I'm not feeling it.

I strongly suspect it's largely hormonal.  I also think that it's a result of two incredibly busy weeks at work suddenly ending.

The last time I had bliss, laughing out loud until my sides hurt bliss, I went to Busch gardens with the Spousal Equivalent and a good friend.  We all squished onto one seat of Le Catapult and screamed.

I need a good ride on the teacups. 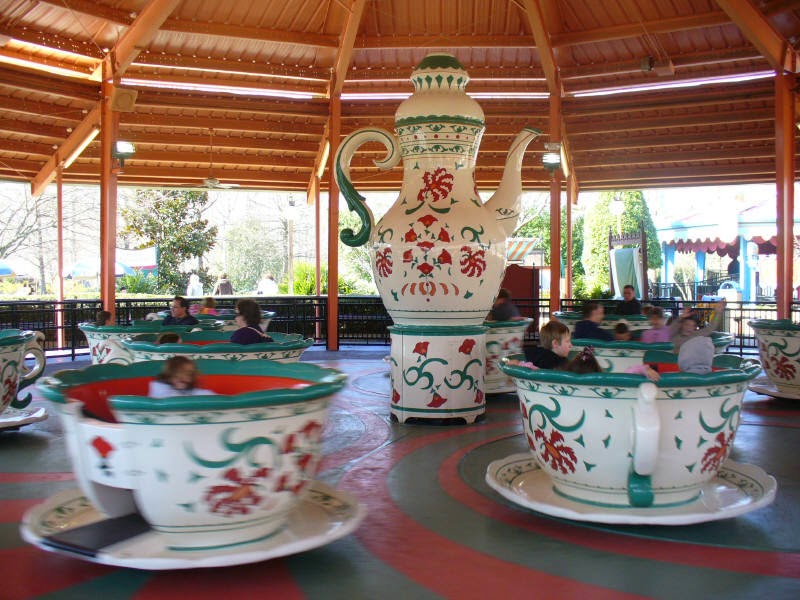 This is after being sick for a week, and then the mess of stopping breathing while doing the 8K on Saturday.... 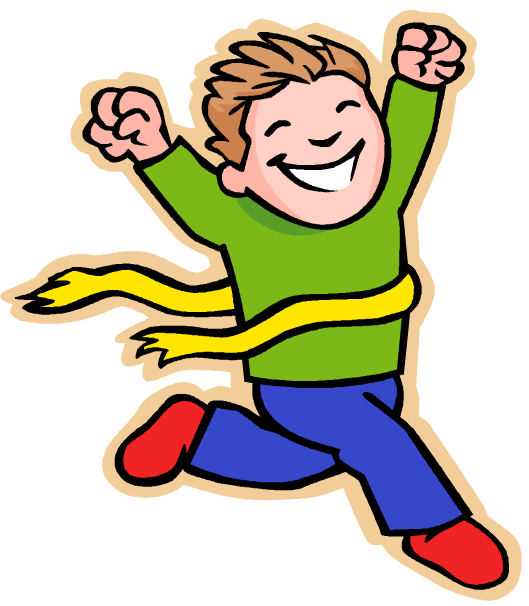 Every day: If it's not raining, walk or run before breakfast.  I'm starting out by walking tomorrow.

Weekends:  At least one of the days (if not both, dependent on weather) a long run.  I want to hit the trail and do 5 miles this weekend, and increase it to 10 miles by the end of the month.

Now, if the weather would cooperate....
Posted by Meari at 1:17 PM No comments: 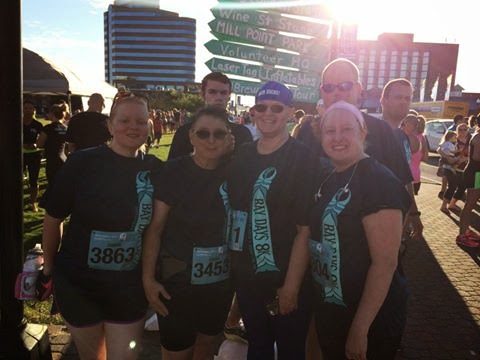 See this picture?  This is my running crew.  the lovely people of my Weight Watchers meeting.

And after the race started, we never got to take a picture.

So the race.  Now, as I have said, I've been sick for a week.  So I wasn't expecting much.  After mile 3 I walked the whole thing.  The course was BEAUTIFUL!  I saw various things:  A carful of nuns, a lady running with her stroller of dogs, people pushing their disabled children in strollers.

I'm practically in tears when I round the corner and see the Spousal Equivalent.  Then, 20 FEET from the finish line, I can't breathe.  It was like my throat was closing when I inhaled.  The very nice lady that was handing out water bottles took me to the med tent.  They calmed me down and cooled me off.   When I didn't feel like I was going to pass out, I clung to the SE and we left, not before getting a medal.  I finished this bitch.  I'm getting a medal. 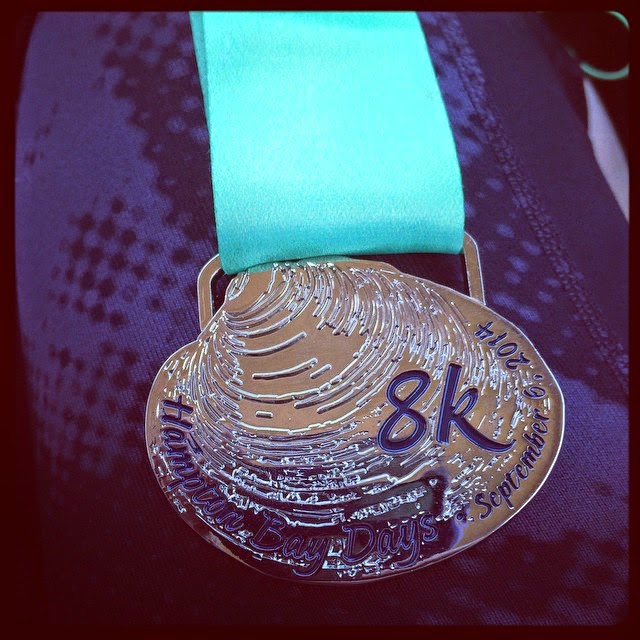 I was taken home.  I laid down.  I took a cold shower.  Then we decided.  (Well, I decided) that I wanted to ride 2 rides, so we went to eat lunch at Busch Gardens.  Well, I rode 2 different rides than I intended (The swings in Octoberfest?  No), and my battery ran out.

Now, it's time for a chick flicks and puppy cuddles.

Well this is inconvenient 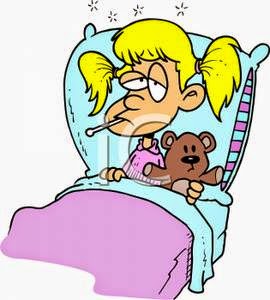 Tomorrow is my first race of the fall season.

Sunday, I picked up a nasty cold (or flu, or something).

Last night, whatever it is traveled into my chest.  hard to breathe... coughing..

And I have a race tomorrow.

I wanted to get out this week and run.  Ha!  I'll be lucky if I can run my race tomorrow!

I have a plan for tomorrow:

Walk if I have to.

And get back on the road.  4 weeks until my half marathon!!
Posted by Meari at 8:03 AM No comments:

Sunday I sat in service, quietly willing away a growing panic attack.  I'm sure 90% of my problem was the fact that I was sick, but still.... it left me with a lot to think about.

Am I happy with my church?  or any church?

My issue seems to be less with the message (unless it's pledging season..) and more with how I fit among the people.

We have a too-large congregation in a too small building.  The coffee hour between services is wall to wall people.  People that I should be having social interactions with.  But in that large a crowd?  I'd rather be in the solitude of the bathroom.  I avoid large dinners and other crowds.  People vaguely know me, and the burden of social interaction seems overwhelming at times.  I don't know what to talk about.  I overshare and can't stop talking when I'm nervous.  (There's a lovely chapter in the Bloggess's book that is JUST THIS)

I used to be a part of the young adult community.  But I'm a few months away from being 40.  I'm hardly a young adult anymore.  Besides, these young adults are full of a passion for social justice.  And while I feel for those causes, the enormity of them leaves me at a loss.  I admire the youth for their zeal, but I'm no longer young.

Sometimes I wonder if I'd be missed if I never came back.  Would my absence be felt?  Would anyone care?  I'm not close to many at the church.  Would they notice?

I also wonder if I belong in their beloved community....

I also think that I'm ill, and stressed, and severely in need of a nap.  Maybe things will look better after a few days off from work and a good nap.
Posted by Meari at 7:05 AM 2 comments: