Why should a 41 year old woman care?

Because I am a HUGE Harry Potter fan.  And I'll publicly admit it!!

My story started when I was in grad school.  My mother was working in an elementary school library when the first three books came out (they came out all at once, or in quick succession here, if I remember).  I tried in vain to get the books from the public library.  Once day my mother's boss, the lovely librarian, asked her how fast I could read the new Harry Potter books she had just received.  The first three books.  I was all over that!

I remember standing in line with my friends for the midnight to pick up the Order of the Phoenix.  When then went to a Denny's, sat in a booth and read.  Grown Women.  In our 20's.  Reading at a Denny's at 2am.

Why do I love Harry Potter?

Harry Potter exists in a world that isn't perfect.

I mean... there was a mass murderer...  That terrorized society not once, but twice.  And the second time, the news was kept from the people and hushed up in the press. 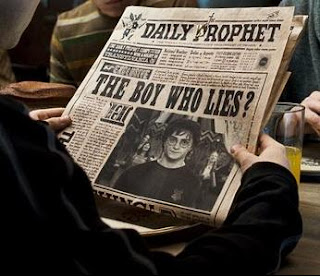 (That bitch is scary!  Even more so, because we all know people like her!)

But even in all of this, there is light.  There is spells that feed on hope and happiness that conquer the darkness.

This is a world where travelling happens in a thought.  Where magic can help with housework, travel, cooking and every day tasks.  Where a game like Quiddich can exist!

Where money transactions happen in coins.  There a Rubber Duck is a mystery.  It's a place that by now is so familiar that it feels like home, but it's so different that it's like a foreign that it's like a vacation.

I know that other adults think that I'm crazy.  They think that it's just a book.  That in the scheme of things that it's not important.

And they are right.  There are other issues in the world.  There is war, racism, poverty.

But there's evidence that Harry Potter can teach tolerance and empathy to children.  By looking at the race purity and the corrupt leaders, children can use that to analyze and processes prejudices in their own lives.

But the most important thing about Harry Potter is that it's a world that's there when the pressures of this one become too much to handle.  It's my refuge, and as things in the media and on the news get more and more grim, the world of Harry Potter will always be there.

So this Sunday Harry Potter will be 36 years old.

Happy birthday to The Boy Who Lived.

Thanks for the reminder! Gives me a reason to make a cake this weekend ;) Happy Birthday, Potter!