It was the first hot, humid day of the spring.  (Last time I ran this it was almost 40 degrees)

And I ran a crappy race.  I wore clothes for weather that was 20 degrees cooler.  I started in a corral that was WAY too advanced for me.  I tried to keep up with the faster runners. 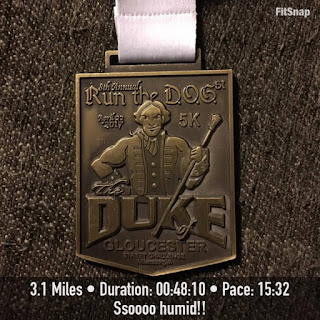 After I got home, I had a long shower and had time to think.

This time next year is the Disney Star Wars Dark Side Half Marathon.  I was actually considering running it.  But after that disaster our 5K, I don't know if I CAN.  What I DO know is that this is something I can work on.  I can set my alarm on Saturdays and get those long runs in.  I can step up the cardio that I do.

But what I need to sit down and really think about is:  Do I WANT to do another half marathon (another 2, actually.  I'll need to run a fall half if I'm doing the spring one). I swore after the Princess Half that I never wanted to run a half marathon again, and here I cam contemplating another long race.

In the end, I've got some time to make this decision.  But in the meantime, I'm going to train.  There's no harm in it.

Well. I'll train, when it stops raining around here!