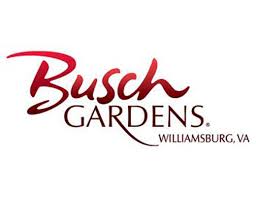 Saturday dawns cool and breezy, so we went to Busch Gardens.

Being Virginia residents.... and not anything more than a 15 minute drive away, we acquired season passes this year.  We made plans to tour the park with my bestie, her mom, and her 2 year old daughter. 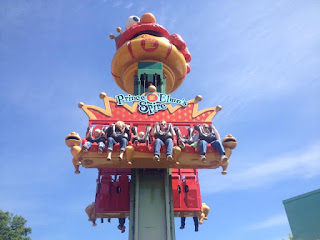 Yes, I wanted to take the kidlet on the kiddie rides.  And I did!  I'm in the white Hello Kitty sunglasses.

We did a few kiddie rides, and went on the tea cups.  (It's called something different here... but it's the tea cups) before heading to New France for some lunch.  the secret for dining in Busch Gardens?  1.) If it's busy, have someone in the party procure a table while y'all are in line.  2.) Get a sampler plate and split it with a friend.  Since we were in the New France smokehouse, we got a Smokehouse sampler!  BBQ chicken, ribs, and brisket.  Sides are extra, but they sell a whole cupful of strawberries for dessert.  YUM!

Now, I've been to BG a few times, but never during the summer.  So I'd missed some things.  Namely: Celtic Fyre and DarKastle.  (I'd also wanted to try Escape from Pompeii too, but it's a wet ride and it was too chilly).

We got in line for Celtic Fyre, and bid goodbye to my bestie.

Now, Celtic Fyre is a stage show.  It's like Riverdance, but smaller.  My good friend Red was in it for some years. (You can see her here:  part 1, part 2, part 3, part 4)  There's Irish Dancing, and singing and tapping....  you know.. like Riverdance.

But I have to tell you.... I knew the words to the songs.  And they sang Wild Rover.  And I KNOW that song.  I didn't plan on singing along.. loudly... there was no conscious decision.  No, I just started singing along.  Thank god audience participation was encouraged, or I would have felt silly.  (It's in Part 3, above)

We then stood in like at DarKastle for like half an hour (It's my favorite kind of ride, a dark ride.  The kind Disney excels at!)

Then went home.   I was exhausted.

But we're going back next Saturday!
Posted by Meari at 5:43 AM

Yay!! Busch Gardens and Celtic Fyre! SO glad you got to go AND that you sang Wild Rover. :)