Side note:  This post won't contain a single spoiler.

After years of seeing spoiler alerts, I came to realize that I must be weird because I actually like spoilers.

I know!  It's so weird!  Why would you want to know what happens in a movie or TV episode?

My Spousal Equivalent has spent many a night watching me pace between the kitchen and the living room as the tense or social awkward scene plays out.  By the end of season finale season, my kitchen end up super clean!  I have spent large parts of movies, practically in Spousal Equivalent's lap, trying not to jump out of my skin.

I actively search out episode recaps when we watch a show on the DVR.  Heck, when the Game of Thrones episode leaked... and there were a few scenes on YouTube... heck yes I watched!

and I saw this stuff: 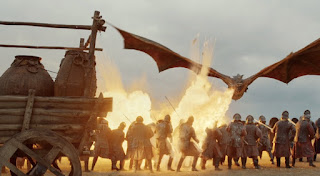 yes, I watched the episode the next day.

And I enjoyed it even more, because I wasn't super surprised by anything.