Is is possible to hide from reality?

In the last few weeks, the media has been a veritable shit show of awful.  From the President being awful around the world, to white guys being awful at home.

I've wanted to hide under the bed and ignore the awful stuff until it went away.

But I realized something today.  Hiding from reality... ignoring change in society and the world....  what's is what got us into this mess in the first place. 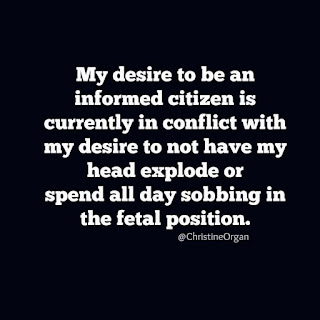 let's look at what has happened in the last few weeks:


It's the last one that made me think the most.  There's a few issues involved in this.  (What follows are my opinions!)

I think the root of many of these problems goes back to the idea that people like things the way they were.  White guys like being on the top of the heap.  Even some of the most liberal people around may harbor a bit of prejudice when they want things to go back to the way they used to be.  And we all know that ignoring the problem doesn't make it better.  Hiding from reality won't work much anymore. 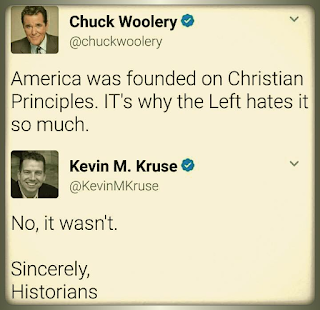 Mr. Woolery is thinking back to a time when a good chunk of everyone in the US was Christian.  (Or at least everyone who Mr. Woolery considers to matter)  He looks back on that mythical time of Pilgrims and Patriots and has Hamilton-esque dreams of the founding of this country.  (Except in his dreams, all the Hamilton actors are white)  I'm sorry Mr. Woolery, but Mr. Kruse is right.  This country wasn't founded on Christian Principles.

My question to White America is:  why didn't more people speak up as those women were being harassed on that train?  Why don't more people try to shut down hate speech and ethnic, racial and religious slurs that we hear every day?  Are we afraid of also being stabbed?  Are we so used to minding our own business (like our parents told us to) that we don't speak up?

I think there's been a protest just about every month since the President took office.  Sadly, I think both sides of the issue are becoming bolder, more outspoken.

I'm absolutely terrified by what I see on the news every day.  A Handmaiden's Tale is so terrifyingly close to reality that I won't watch it.  But what can we do?

Well, we do what we can.  If it it is just correcting people when they are factually incorrect or speaking up as bravery will allow.
Posted by Meari at 7:03 AM