I had some Mandatory Fun this Weekend

Months ago, we learned that Weird Al was bringing his tour to town.  So I bought tickets! 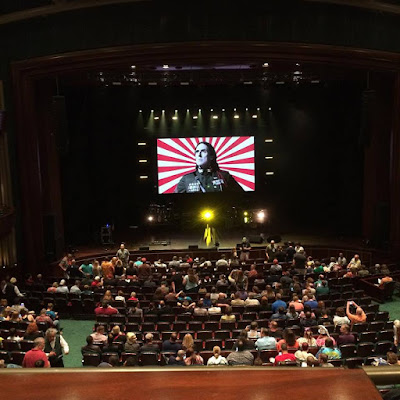 
I opted for messanine seats.  But not just any sets.... front row of the mezzanine, center.

The show was amazing.  It started out with Tacky.

Al wasn't on stage....  was it pre-recorded?  Nope.  it was a live feed of him walking through the halls, just like in the video.

I went in to the concert with the hopes that he'd do my favorite songs.  And he did...

Honestly, the concert was simply amazing. It was a mix of live performances, wild costumes, and video projection (that filled in the time between costume changes)

It was simply the most fun that I have had in quite a while.

What are my favorites?


Dare to be Stupid


It's All About the Pentiums


White and Nerdy (Complete with Donny Osmond on the screen)


the encore was Star Wars themed.  The band was on stage with Darth Vader and Storm Troopers (Members of the 501st)  they did The Saga Begins and Yoda.

Hell yes I sung along!

I loved that fact that there were a lot of kids there.

My only regret... not buying a shirt.