Fangirl (Did Rainbow Rowell spy on me in college?) 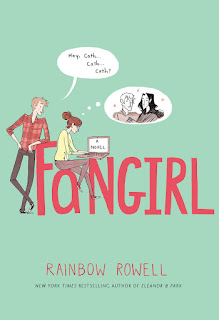 After I listened to Geekerella, I decided to listen to the Audiobook of Fangirl again.

Fangirl is a book by YA author Rainbow Rowell.  It's about Cath and Wren, twins who are freshmen in college.  Cath is the main character and the book's narrator.  She is an avid fanfiction author and struggling with anxiety.

There are many, many points in this book where I have to stop and take a breath.

I swear.  At points she is describing me.  I used to be an avid fanfiction author.

And we all know my struggles with anxiety.

Here are some quotes: 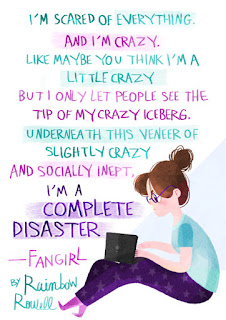 "Cath could already feel the anxiety starting to tear her stomach into nervous little pieces. "It's not just that… I don't like new places. New situations. There'll be all those people, and I won't know where to sit—I don't want to go." (chapter 4)

“The arguments in her brain were like a swarm of people running from a burning building and getting stuck in the door.” 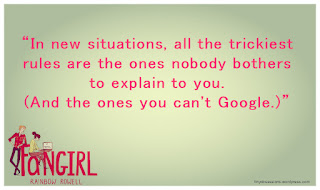 “Too much crying, she thought. Too many kinds. She was tired of being the one who cried.”

I also appreciate that Rowell did her research, because this runs in families:


"I'm crazy like him." She was already having panic attacks. She was already hiding at parties. In seventh grade, she'd been late to class for the first two weeks because she couldn't stand being in the halls with everyone else during passing periods. "It's probably going to get worse in a few years. That's when it usually kicks in."(Chapter 19)

Her father has issues as well.

I wonder how many women read this novel and though: wow... I'm Cath!

I wrote fanfiction.
I have a love for Harry Potter (Simon Snow in this book) that won't die.
We both have anxiety issues.

Thank you Rainbow Rowell.  Thank you for this novel.
Posted by Meari at 8:06 AM