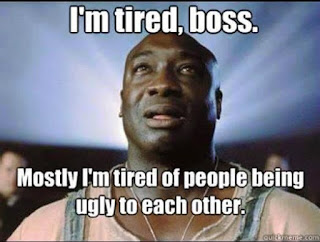 There is no doubt that this election has been ugly, and continues to be so.

Well, some people can, but most of us can't.


2.) As a party, the Democrats need to change.  They have virtually ignored the rural working class and their problems and this is not right.  Here's some reading to that note:


They can't keep going on the way that they have been.  Honestly, POLITICS as usual can't.  And if Trump continues Washington politics as usual, this will be your time to come and and actually change!!!

3.) We need to work hard to make sure that their populations that are currently afraid are supported and helped.

4.) We can acknowledge that this is going to suck, here is a great article to that.

On the Republican side
1.) The day after the election there were protests, but there were also reports of racist graffiti.  Social media has lit up with stories of harassment to minorities in Trump's name.  It happened after Brexit too.  Now, are all of those reports true?  Maybe, maybe not.  But the feelings are still there.  I asked the Clinton supporters to refrain from violence.  The other side needs to as well.  Violence is never an answer.

2.) Y'all voted your guy in on his promises of change.  Well, I hate to tell you this, but Washington cronies and lobbiests are part of his team now.  I'll wager that after all of this, nothing actually will change.  I understand why you voted for the guy!  I totally get it!  (Unless you want to kick out all the Muslims, or are pro-gay conversion therapy... I'll never get that)  I voted for Sanders in the primary!

Trump ran on a platform that spoke to the working class.  And already he's said some things I like.  Yay fixing the infrastructure!  But economists have looked at his policies, and there's a REALLY good chance that your welfare and Medicare will get cut and your taxes will go up.    Let's all hope it doesn't.

3.) Republicans NEED to understand WHY many Clinton supporters are afraid.  The LGBT community is afraid of Pence.  Immigrants (the legal ones) are afraid of being deported.  Muslims are afraid of violence or Government action against them because of their religion, even if only a few of the religion are terrorists.

Did we all get that?  I know that I'm preaching to the choir, and that a lot of supporters on either side think that compromise will never happen.  Both sides are afraid that the other will take away their rights and civil liberties.

But coming together must happen.  Until then, I'll leave you with funny GIFs