What Marching Band has taught me

And I've talked about band before.  And again...

But honestly, I think that Marching Band is an incredible activity, and the benefits stay with you.

In all of that you had to make sure that your homework was done.  Your dinner was consumed.

Also, you were expected to start at 6.  That meant getting there at 5:45 to get your gear.  At 6pm you formed up with your section and marched to your practice field.  Being late simply wasn't an option.

And I did it.  I managed to get everything done.  No whining.  No poking.

I know it's hard to believe, but we policed ourselves quite a bit back then.

You dropped your equipment, or messed up majorly.  You did push ups.  I don't think I was ever told to do them... it was just something we did.  (Though I remember push ups being replaced by doing the move you messed up on 10 times in a row...)

On the buses to the competition, we always were silent once the bus pulled off the highway.  That was a time to mentally go over your performance.  Mentally get yourself in the zone.  No adult ever told us to do that, it was something that the students started.  That the students maintained.

I remember times when everyone was struggling to get what needed to be done... done!  We'd call silent rehearsal.  No talking while we were stopped and the instructors were trying to fix drill issues.

I also remember doing our last run through on our last practice of the season alone.  No parents.  No spectators.  It was OUR time to get it right.  It was up to us then.

I didn't write this, but I found it on Facebook. 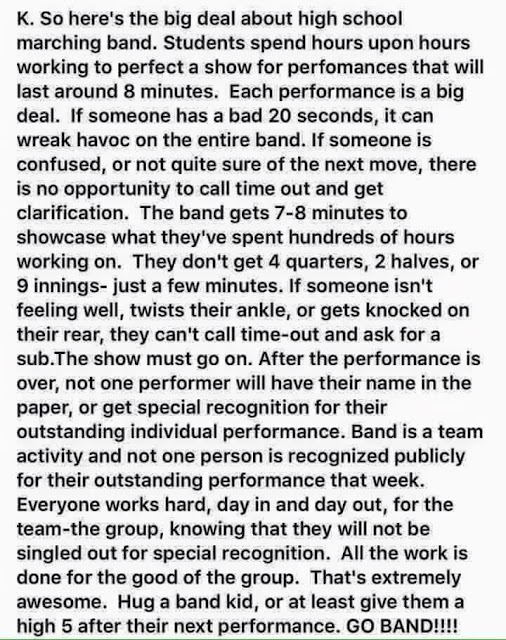 It's so true.  Every single person on that field is important.  If someone is missing, it's painfully obvious.  And as much as there were cliques (aren't there always?) we were a team.

During my years, someone started a tradition.  Cool tape.  Electrical tape is something that very literally holds a band together, so we all have rolls of the stuff.  Someone, in some section, decided to rip off pieces and give them to people.  You wore it on your undershirt, under your uniform.  And it wasn't one section.  It was the entire band.  The people that handed it out made sure that every. single. person. had cool tape before we got on the buses to head to the competition.

In these days of helicopter parenting.  Of kids getting everything immediately, or because the parents demanded it, Marching Band is an important activity to help teach kids the independence and skills that somehow are lacking.  I work at a college.  I see the lack of self discipline and time management every day!  Hell, at times I need me own refresher course.

These lessons stick with you.  As does the bond of this amazing shared experience.

I think one of the things that make West Genesee so great are the bonds that the band creates.  Each generation builds upon the one that came before it.  I spent the weekend with girls that had graduated in the late 90's and all the way until last year.  We all had stories.  Many of other people's stories were so familiar, I swear I could tell them myself.

We all have been part of something truly excellent.  And that touches you and stays with you for a lifetime.