This past weekend was the 50th anniversary of the West Genesee High School Wildcat Marching Band!  640 Alumni came from all over the globe to march in the Camillus Memorial Day Parade.

And it was amazing!!

But it took some work!

Saturday it was 95 degrees.  90% humidity.  Not a cloud in the sky!  It was brutal.  It was like old school band camp brutal!

Going in, I wasn't at 100%.  After that round of norovirus, I was still working up to get back to full strength.

That weather didn't help!  But I let the instructor know.  I was encouraged to take breaks.

We were there from around 10am, until 4pm.  We covered 2.5 miles on the suburban streets of Camillus, NY.  Multiple people were seen by EMT's.  Multiple people (me included) had to sit down on someone's front lawn and wait for a ride because we were going to pass out.

In the end, I got a severe sunburn (I kept sweating off the sunscreen!)

But I was put into the group of banners that were doing more difficult work, and I was happy about it! 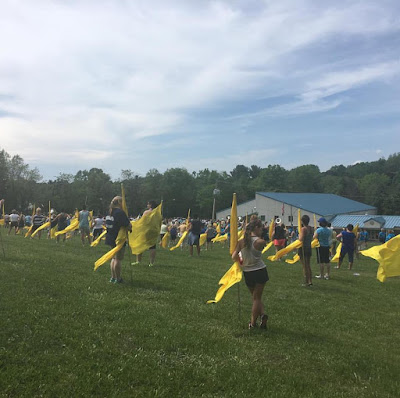 Sunday's rehearsal was an hour shorter.  There were going to be thunderstorms and we all were carrying 6 foot metal poles.

But I did the work:

We ended up hitting the streets for only a mile this time, and I think everyone made it.

No one slept well.  We arrived at the high school at 8am to board buses.

Within 5 minutes, my high school crew was sitting in the back of the last bus, just like old times.

We got to the top of Camillus Hill, and eventually assembled.  The band gathered together.  And Bill Davern said the same words that he did before every competition:


(Video stolen from Michelle Osborne, who got it from Natalie Waters)

"Everyone Touch. Say a prayer.  A very unselfish prayer.  Not for yourself, but so that someone else in this band can do their very best job today."

And we started down the hill.

Then street beat started.  Something about street beat makes you stand a little taller.  Shoulders down.  Head held high.  I was here among 50 years of people that have experienced the same triumphs and tragedies.  We've touched excellence, and that feeling stays with you.

Then, before anyone was seen lining the parade route.  Roll off.

And it was time.  The culmination of a weekend of rehearsal.  Of months of practice for some.  Of years of prep work for others:

And then it was over.  We rounded the corner by the Green Gate Inn, and it was on the buses and back to the school.

But the media caught up with us:
from syracuse.com
from twcnews.com
from cnycentral.com 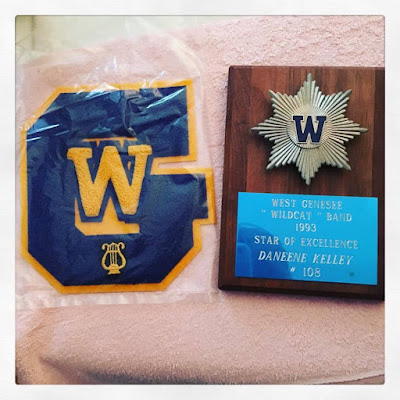 I have some souvenirs from the weekend.  I found my band Starburst.  Every senior gets one when they graduate.  I also found my Varsity letter.

I may also have skin cancer from the weekend.

But I'm exhausted, dehydrated, and emotional.

It was one amazing weekend.

See you in 5 years West Genny