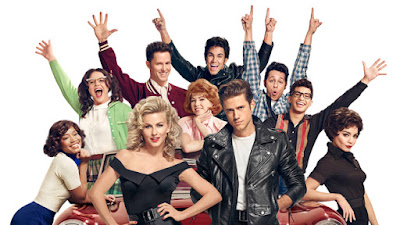 Why was it wonderful?  Because unlike the three musicals that NBC did, this one worked.  And worked well!!

Why NBC ever picked Peter Pan Live, is beyond me.  The musical isn't all that exciting.  They did better with the Wiz: Live.  At least the show was interesting.  The Sound of Music Live should have been a hit, because the movie is loved.  But no, they did a straight adaptation of the stage show.

2.) They found a live audience!

Anyone who has ever performed in front of actual people know that there's an energy that comes with it.  That is one thing that I have found lacking from ALL of NBC's live musicals.  There was no energy.  Everything seemed lifeless.  But having the actual people on set gave Grease life!  it was incredible!  Even John Barowman agrees with me!

Aaron Tveit starred in 2 musicals on Broadway.  Vanessa Hudgens starred as Gigi on Broadway.  heck, even Carly Rae Jepson and Keke Palmer starred in the Broadway revival of Cinderella.  Most of the other actors had loads of both singing and acting experience.  And it showed.  There weren't the Carrie Underwoods or the Uzo Adubas in the cast.

Heck, Ana Gasteyer was spot on.

NBC SERIOUSLY needs to step up it's game with Hairspray.