Buffalo: Canadian wine and all the Wright Stuff, Part 1

This past weekend I visited my father and his partner in sunny Buffalo, New York.  Yes, it actually was sunny!  We had two objectives:  Wine, and Frank Lloyd Wright. 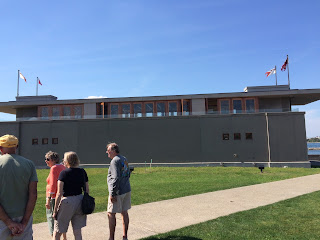 First up was the Frank Lloyd Wright Fontana Boathouse.

The structure and design was amazing.  And even more amazing, the building (built in 2007) is actually a working boathouse for a rowing club.


it's also rented out for parties.

We hit the Anchor Bar for lunch.  The original home of the original Buffalo Wings! 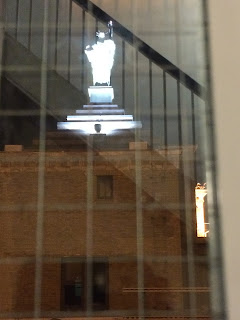 That night we went to the Skyline Social.  it was held in the Mid Day Club, which is inside the Liberty Building.   Yes, the building has miniature statues of Liberty on the roof.  (that picture was taken form a doorway).

The views were spectacular!! 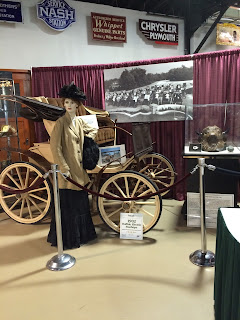 The next morning we joined the All Wright, All day tour to see the Frank Lloyd Wright Filling Station in the Pierce Arrow Museum.

We got the the museum early, and had a blast looking at all the old cars.

Did you know that they made cars marketed towards women?  Pierce-Arrow has a huge collection of the lady cars!

But the masterpiece of the collection is the Frank Lloyd Wright Filling Station.

it was designed for company in Buffalo in 1927, but never built.


Later that evening we crossed the border into Niagara Falls, Canada.  We stayed the night at the Sterling Inn and Spa.  The room was amazing.  And breakfast comes right to your door!

We then went to some wineries.  (As you do...)  We tasted some at Jackson-Triggs, Sadly Peller Estates was a bit bought out.. before going to a tasting and dinner at The Trius Winery.


I had more wine to drink than I've ever had before!