Stuck in a ditch

Last night, I went to a party.

parking in the street is kind of tight, so I decided to park down the street, near the corner.

Except the water I parked near hid a large ditch, and I was stuck.  No, seriously stuck. 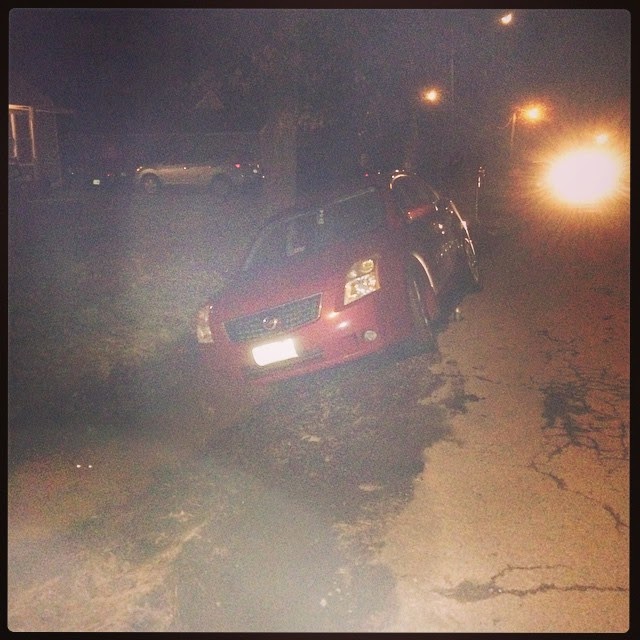 Some WONDERFUL gentlemen tried to get me out, but that didn't work.  So I called the atuo club.

Then I got a call.  Was I satisfied with my service that was JUST COMPLETED?  I promptly freaked out and pressed 2 to tell them that the service wasn't completed.  They were waiting for a cop car, and I was told to go inside.  A few minutes later they called again.

The answer left me hysterically laughing.

The tow truck broke down and needed a tow.  Seriously?  I got put on hold again.  Someone would be out there in an hour.   I gave it 20 minutes and went back out.  The tow truck was pulling away.  I almost cried, but I called and they turned him around.  They eventually got me out and on my way home.  No party for me.

I know I sprayed mud everywhere/  In speeds above 60 the steering wheel vibrated.

I just took the car in for an alignment, and was told that it probably wasn't the alignment.... Let's pray that the axle isn't bent or something likewise as expensive.  (I believe bent rim and wheel weight being off were also possibilities.  the bent axle was my addition)

I still feel all jittery, like last night's panic hasn't warn off.  The car is dropped off and Firestone is busy, so it's a day inside for me.  Sadly, my car troubles made it impossible for the Spousal Equivalent to work.

Now we wait for a diagnosis.  I'm back in my jammies and having a cup of decaf.

Wish me luck.  I need some better luck!

ETA:
The car has been aligned, and thanks to the new AutoBell, it's REALLY clean.  (there was standing water INSIDE the car....)
Posted by Meari at 7:03 AM