The Virginia Running Festival vs. The Crawlin' Crab

I was all sorts of ambitious when I signed up for not one but 2 half marathons this fall.

Now that I've done them, which one will I do next year?  I'm only doing one. 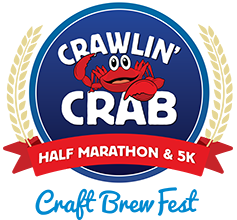 Both races had some amazing routes.  Virginia Running Festival (VRF) was flatter.  Crawlin' Crab (CC) had some hills.  It may have been me, but multiple times during the VRF I felt as if I had to stop and ask directions.  Some of the intersections weren't clearly defined.  And the fault may lie with the fact that I run slower than a turtle and they were starting to break down the course a bit.

There were plenty of water stops in both races.  Both had water and Gatorade.  But the VRF has a HUGE lack of porta-potties.  CC had the potties at every stop.  I don't know that every water stop is necessary, but having at least one on the front half of the course might have been nice...

CC also had a candy stop, which was a nice change of pace.  (I hear that the Richmond Marathon has a beer stop!)

Not that Crawlin' Crab's finish was bad.. but nothing can compare to the finish line at VRF.  There's nothing like coming into a stadium and taking an actual victory lap.  There is plenty of space for people to line the course at the end to cheer you on!

Obviously VRF wins in the distance to home category!  Hell, my BFF can walk to the course from her house!  (If I do it next year, I'll tell her where to go and when!)

I don't know yet which of the two races that I'm doing, but I do know that VRF has a lot of room for improvement.  It's not that it's a bad race, it's just that I know that Flat Out can do SO much better!

But next up is Christmas Town!