I know I've mentioned this before, but Marching Band was a HUGE part of my High School years.

Yup, cut me, and I bleed Blue and Gold!

I don't know why I looked, but I knew that the band was travelling, so I looked up where (they've come to Virginia Beach before) and yup, it was Virginia Beach again!  Did I go?

You bet your sweet bippy I did!!

The Spousal Equivalent went, since no one else could, and since he was sick we left right after West Genny played.

He now fully understands what I mean when I saw West Genny is committed to excellence!

Before I get into the competition, let me break down the scores:
See?  Excellence!

The night started out with the smaller bands, and went to the larger ones.  (we left before Princess Anne, I actually really wanted to see them!)

I have some thoughts.  And these thoughts are mainly about colorguard and Visual Effect.

I'm very serious when I say that some of these guards need like a day with anyone who is skilled in guard work to clean them up a bit.  Body facings were off.  Messy flag work.  Eyes on the box, not on the ground!

But in these girls defense, it was super windy.  I saw flags being ripped out of people's hands!

But with the lower classes of bands, the music was really good!  (Some of the marching needed a bit of help...)  I'd love to see the guard add to the over all effect, not detract from it!

Now, I waited all night.  We were there on the cold metal benches for hours waiting for what I hoped was going to happen.

The band started to take the field and a parent bellowed from somewhere on the stands above me:
"GIMME A W!!!!!"

I felt tears spring to my eyes are I shouted back.  I remember being on the field, and hearing my parents join that cheer.  I remember cheering that same cheer as we left the huddle before competitions.  I remember being at States one year and hearing the parents rows below me shouting it.  It's the same cheer that has been used since before my years in band, and I'm thrilled that it's being used now.  (They spell out WILDCATS, for those that didn't get it) 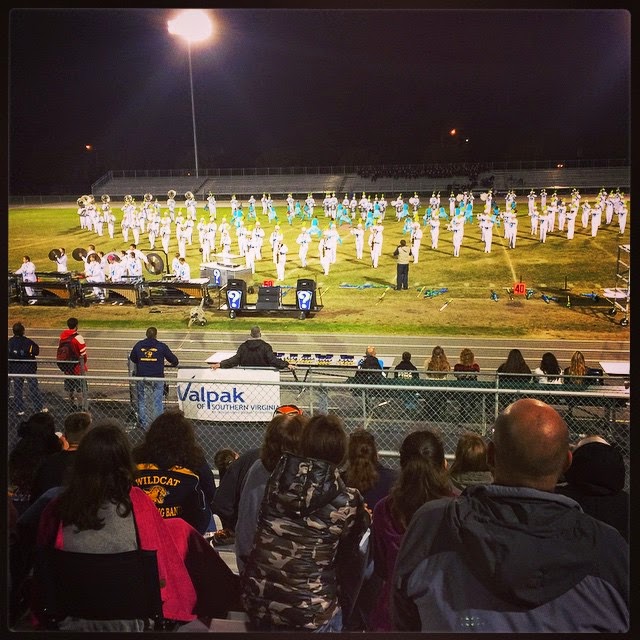