Sometimes you have to just throw in the towel 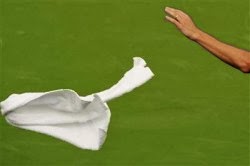 And I did that yesterday.  After a week of being sick, I was feeling crappy enough to call in and take the whole day off.  My head was pounding, my sinuses were full.  Moving hurt.  It was time.

Unfortunately, this means that my one goal for the week might go undone.

I stated on twitter that there was NO hope of winning my DietBet.  As frustrating as that was, I decided that my new goal was to see a weight starting with "173" on Tuesday.  The complete lack of exercise has kind of killed that goal as well.  (Plus the fact that I won't be at Weight Watchers on Tuesday, I have a Doctor's appointment)

I got out this morning and took the dog for a walk around the block.  It's a start.  Next?  Some Wii Fit U Yoga.

When one feels this crappy, one needs to start back at the beginning.