I never thought they'd go there.  But there was a school shooting on Glee.

The show started off crazily enough.... Brittany is crazy.  Beiste is in love with Mr. Shue.

Then a gun went off. 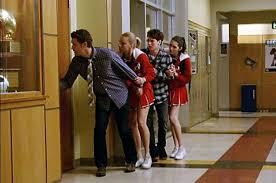 Now, for the uninformed,  the teachers did what they should have done:  lights off, door locked, and everyone hiding in corners and out of sight staying silent.

Sue took the blame.  She was cleaning her gun and it went off.  I could tell she was lying.

Becky actually brought the gun. She was scared.

I must admit, I'm rather shocked that they went there.  But I'm not all up in arms about it.

And in other news, there's no word on season 5.  Apparently the show runners aren't committing to it yet.  And Fox is unlikely to renew if they aren't committed.  I'm not overly broken up about this either.  If this is the last season... it's not a bad place to stop.
Posted by Meari at 7:18 AM